The first working week in Chennai, India passed by rapidly, confined, as we were, within the boundaries of the HCL office complex during the day or the Gem Inn Resort at night. With the weekend finally upon us, we were keen to get out and explore the countryside, in particular, the temples of Mahabalipuram, a UNESCO World Heritage site. Our regular weekly driver Chris being unavailable, we had procured Babu for the day, so Bob Kane, Chris Daughton, Jim Guy and I set off around 10h00 Saturday morning. Most major roads are toll roads, though God knows what the authorities do with the money.

Passing through the Chennai suburb of Kelambakkam, the road surface took a turn for the worse. We passed an unsightly rubbish dump right next to the roadside, a cow foraging in its midst, directly opposite where new luxury apartments were going up, a sight that is not uncommon. It seems to me that the planning and provision of public services, whether it be at central or local government level, is not able to keep pace with the enormous growth in private enterprise, resulting in a somewhat sub-standard infrastructure. A documentary of significance, The Plastic Cow, highlights the paradox that exists in modern India [The Karuna Society for Animals and Nature, has been in existence in Puttaparthi, Andhra Pradesh, South India, since 2000. It is a registered non-profit organization working for animal welfare and the environment].

To be fair, I have only been in one city in the south of this proud country with its unique culture and undoubted charm for just over a week, so I cannot speak for the rest of the country. Difficult as it may be to establish in developing countries, the apparent absence of a nation-wide green, environmental ethic at grassroots level in India appears palpable and disturbing.

Hugging the coastal road, the countryside takes on a more appealing quality near Devanen, as one passes a number of beach resorts, not to mention a nursery by the name of Sri Green Sentei. We reached the Shore Temple, which over looks the Bay of Bengal. It was originally one of seven pagodas, the others having been consumed by the ocean waters, as evidenced by the foundations that remain just off the coast.

In fact, in 2005, archaeologists began underwater excavations of what is believed to be an ancient city and parts of a temple uncovered off the coast by a tsunami [BBC article]. As the waves receded, the force of the water removed sand deposits that had covered the structures, which appear to belong to a port city built in the seventh century. 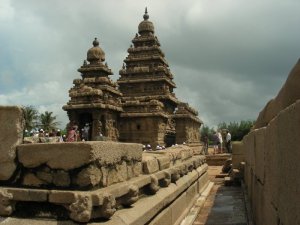 The main shrine of the temple, where we had to remove our shoes prior to entering, is dedicated to Shiva, as the smaller second shrine. Bob had secured the services of a one John Basha as our guide. We enjoyed and appreciated his genteel manner, having been stopped on the roadside and accosted by another guide’s somewhat more aggressive  marketing style.

With John accompanying us, after a visit to the curio shop where I purchased a hand-painted wooden carved elephant, we moved on to the Pancha Ratha (Five Chariots) shrines, a monolithic Indian rock-cut piece of architecture, a truly astounding work dating from the 7th century. We had to wait a while in the taxi for a sudden downpour to abate, whilst local entrepreneurs vainly attempted to persuade us to part with our rupees for the use of their umbrellas. It was well worth the wait. The purpose of the structure is not known, as sections of the construction were never completed.

Just outside the village of Mahabalipuram (derived from Mamallapuram), we walked to the Varaha Cave Temple, a smaller monolithic rock-cut temple with a mandapam (pillared outdoor hall) dating from the 7th century. At this point John’s tour had come to an end. Though Bob had originally hired him for 200 rupees, we all chipped in with a similar amount.

We strolled into Mamallapuram village itself and headed towards the market place, past the variety of shops lining the high street. It was an eye-opening experience, our senses overwhelmed by sights, sounds and smells of this bustling yet fascinating little town. Traffic charged down the main road, hooting incessantly at fellow motorists or pedestrians strolling nonchalantly across the road. Occasionally the sudden, jarring sound of a partcicularly loud blast of a passing motorist’s horn, possibly due to the sheer close proximity itself, causes one to practically jump out out of one’s skin.

Around 15h00 we stopped at the Mamalla Motel for a vegetarian lunch, well stocked with clients. It was a delicious lunch, my Biriyani meal washed down with a refreshing orange juice. On the way back we stopped at the roadside and walked down to the sandy beach. Removing our shoes, we waded into the water as the waves broke onto the shoreline, the fresh, welcome breeze on our faces. It felt good.

That evening I retired to my room and ordered a meal. Exhausted though well satisfied with the day’s outing, I watched some Premier League football and worked on my blog, recalling Jim’s quote of the day, in reference to the traffic: “The lines in the centre of the road are a mere suggestion”.

A related 3rd-party video clip on YouTube – driving in Mahabalipuram.