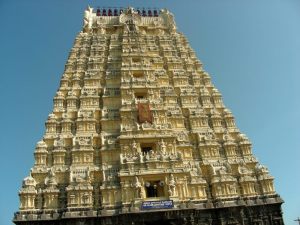 Ēkāmparanātar temple, in the heart of the same town, Kāñcipuram, is in some respects even more extraordinary. It is one of the five major Civā temples, each representing a natural element. Whilst earth is represented here, the remaining temples symbolize water, ether, fire and wind. One notable feature of the temple is the Āyiram Kāl Maṇṭapam, or the “hallway with a thousand pillars”, which was built by the Vijayanagar Kings.

The temple’s inner walls are decorated with an array of 1,008 Civaliṅkam built in single stone. There used to be a 3, 500 year old mango tree in the temple that collapsed two three years back. It is said that the sacred mango tree had 4 different branches that symbolized the for Vedas, a large body of texts originating in ancient India. that constitute the oldest layer of Sanskrit literature and the oldest scriptures of Hinduism.

Whilst Ilango and Tiyagu adjourned to the inner sanctum, Tim and I walked the hallway surrounding the central place of workship. We were suddenly joined by a small group of young boys, one of whom thrust his hand forward to shake ours, the others following suit, each introducing themselves, broad smiles flashed across their excited faces.

When Ilango and Thiyagu returned, a translated conversation ensued over cricket, causing them to giggle with delight. This was followed by a group photo session. They had come to the temple to seek a blessing for exams they were about to write. Upon wishing them luck, a further round of handshaking resulted. Ilango spotted a newly wed couple and so we wandered over to wish them.

Back on the road, we traversed the town of Vandavasi, the scene of a decisive battle in the 18th-century war between France and the United Kingdom for the control of South-East Asia.

After some time we reached the district of Villupuram, built during the Vijay Nagar period. The town of Gingee is surrounded by several hills of barren volcanic rocks. Nestled on three hills, and enclosed by a huge rampart 60 feet thick, stands the majestic Gingee Fort.

To quote [1]: “The three hills form the angular points of a rough equilateral triangle. A huge rampart, about 60 ft. in thickness and a ditch about 80 ft. in breadth encloses the entire space, going all around it. The walls are built of strong blocks of granite. This massive enclosed track forms the lower fort. It is three miles in perimeter and has two main entrances piercing it, namely, the Arcot or Vellore gate and the Pondicherry gate”. 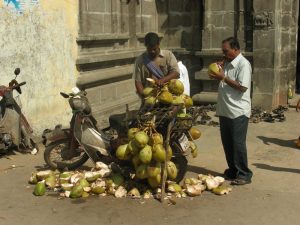 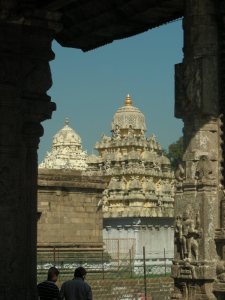