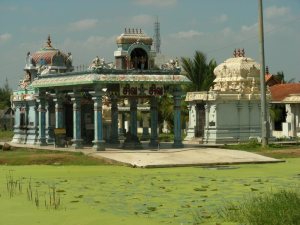 A Hindu Temple not far from the Gem Inn Resort

After a long day on the road unday viewing temples, I felt surprinsingly fresh come Monday morning. Ilango had taken the day off to apply for a licence for his new scooter however he arrived back the next day, bitterly disappointed that he had failed the test on a technicality.  Despite his disability, he had, without question, demonstrated his ability in riding the scooter with sufficient skill. Back at the hotel for dinner, the Kenny G music, repeated night after night, was beginning to get up everyone’s noses.

Richard fraternizes with the locals in Navalur, Chennai.

Early Wednesday morning, I was awoken at 2 a.m. by a call from reception. “Hi, Peter, Richard here”, said the voice in a broad Geordie accent, which I recognised as belonging to a colleague of mine from the UK. “They’ve messed up my booking. Can I come and kip in your lounge?” the voice added.

“Richard who?” I retorted. Having arrived at Chennai airport in the early hours of the morning, the Gem Inn weren’t expecting him to check in until later in the day. A portable bed was brought into the lounge.

“Do you think it’ll be comfortable enough for you?” the cheeky Northerner quipped.  “I brought my tent along”, I replied, “You can always sleep on the lawn out the back, if you like!” After breakfast, some hours later, Richard’s room was available. So the bugger bags the penthouse. Some people have all the luck.

A hardware store on the IT Highway, Navalur, Chennai.

In the course of our stay at the Gem Inn, the American contingent and I had, by and large, found the staff quite reasonable, however, we had taken one character in particular to our hearts, above all, for his devotion to his duties, his politeness and personable manner.

Nothing was too much for Sudeep! It was clear that he also had the intelligence to match. Having broken off his studies after running out of funds, he had worked at the hotel for a spell and was now about to resume his activities as a student, as well as attending his sister’s wedding.  Bob, Richard and I were convinced he deserved a decent tip before he left, in recognition for his service.

I ordered a dessert in my room and made sure that Sudeep would serve it in person, which he subsequently did.  His response when I presented him with an amount in rupees, which, by European standards, was certainly not excessive, was humbling to say the least.

He sank to his knees to thank me profusely, such was the humility and extent of his gratefulness. I quickly summoned him to his feet. “Let me shake your hand as a gentleman and fellow human being”, I implored. The others reported a similar experience the next day. Bob Kane and Jayson Richardson left for home Thursday evening with the remainder to follow. By the weekend, the entire American contingent had left, Tim being the last. 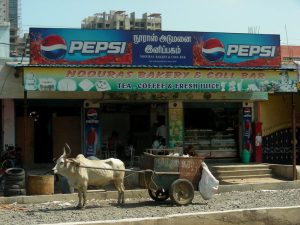 Pull in your cart for a coke?

Ilango had been planning a  trip to his hometown over the weekend and was keen that I should join him however since Richard had arrived, I thought it better to stay. Instead we had an arrangement Sunday to travel into downtown Chennai for some sightseeing with Subu and Abilash, two young HCL engineers. Besides, Saturday provided an opportunity for a rest and to catch up on my blog. In the afternoon, Richard and I went for a stroll down the IT Highway, heading towards the university. Temperatures soared and the humidity made one perspire profusely. We stopped for a coffee at a cafe en route. Upon our return, we headed for a dip at the Gem Inn outdoor swimming pool. I watched some live cricket on TV as South Africa engaged the Australians in a titanic battle. 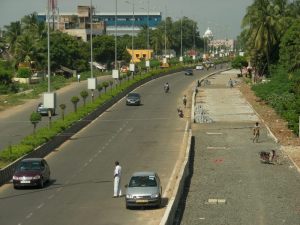 IT Highway, Navalur, a Chennai suburb

Little were Richard and I to realise, how ill we were later to become. At dinner around 19h00, we chatted to the well-spoken, very elegant and charming hostess, Archana by name, who had attained a Masters in zoology. Despite having ordered a main course, Richard expressed a total lack of appetite and hardly touched his food. I watched the first half of his team, Newcastle, against Manchester City, in his lounge, at 111. Exhausted, I returned to my room.

It was at that moment that I was overcome by an extreme case of Delhi Belly. Ooh, boy! Not what the doctor ordered.

*** Watch the video “Driving the IT Highway, Navalur, Chennai” on YouTube! *** 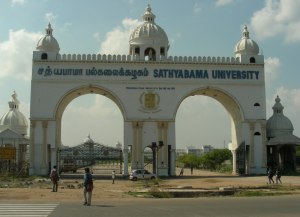 A Hindu Temple on the IT Highway