I was privileged and honoured to have been extended an invitation to the humble abode of Ilangovan and his wife Satanya, for Sunday. Murugesan drove me to the suburb of Sembakkam after fetching me around 11h30. En route I had asked him to stop off at a supermarket so that I could buy some chocolates however after queueing for what seemed like an eternity, I lost patience and returned the goods to the shelf, leaving empty-handed. With no air-conditioning to speak of inside, I was sweating profusely. I arrived at their apartment. Satanya was a picture of elegance, attired in a pale yellow salwar suit.

Ilango was aware that I was after some contemporary Tamil music. Despite the rain, we walked to a small music store on the main road, just two blocks from his home.

Motor cycles are the rage - up to 3 on a cycle, no helmets!

I discovered that the music Arul had been playing in the car some two weeks ago on the way back from our 500 km trip across Tamil Nadu, were all off a recently released mp3 cd. And a right royal bargain it turned out to be at 40 rupees! Taking an auto rickshaw (my first!)  to a confectionery store, we were hoping for a coffee but settled for some barfi, a traditional Indian sweet. We returned around 14h00 for lunch, a delicious traditional South Indian vegetarian meal of tomato rice prepared by Satanya. 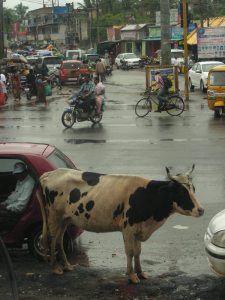 After tea, the three of us made our way to the bus stop on the main road. Owing to the heavy rains over the last few days, sections of the road were so severely flooded that pedestrians were forced to walk in the middle of the road. I cannot come to terms with the unbelievable wanton dumping of refuse that is prevalent almost anywhere you go in this region, in some instances, piled in a heap on the roadside, up the High Street. What strikes me too are are the number of stray dogs roaming the streets. The exotic smells and odours of India are not always of incense and spices. 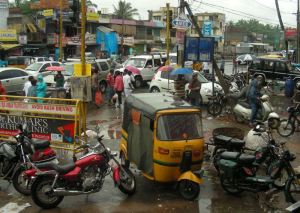 Forced to stand in the bus, which I was quite happy to do, it was only a short ride to Tambaram railway station. Situated at the base of a flyover, a long walkway leads down to the station complex. En route, it’s a hive of activity, vendors peddling their wares, mostly food. It struck me how seldom I saw anyone smoking. Ilango bought the tickets and we crossed over to one of a number of platforms via an overhead bridge, after an announcement had been aired. There is no escaping the sheer volume of people you encounter almost anywhere you go, which comes as no surprise, given that India is the second most populous country on the planet, with over 1.22 billion people, more than a sixth of the world’s population.

Ilangovan near his home in Sembakkam, the grey block on the right-hand side.

Boarding a fast train jam-packed with people, we journeyed to Chengalpattu, a ride of some 20 minutes. It’s en route to Chennai Beach, a railway terminus of the Southern Railway Network in Chennai. The name is derived from a kind of blue coloured lily flower called ‘chenkazhuneer poo’, once found aplenty in all water resources of the area. Vendors forced their way through the crowds cramming the aisles, selling tea, peanuts and samosas. 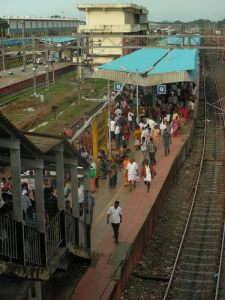 Reaching the town, we passed Kolavai Lake, which the station also overlooks. It is the second largest lake in the Kanchipuram District after the Madhuranthagam Lake. 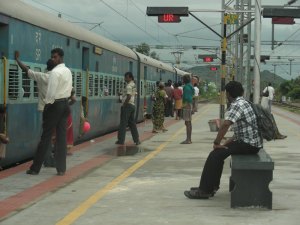 Kolavai Lake is well known for its perenniality. There are no records of going dry in summers. It even supplies water to industries in Chennai when the lakes in Chennai go dry however is now being polluted due to the rapid urbanisation of Chengalpattu. We did not venture into town, Ilango electing to return almost as soon as we got there. Dark by the time we reached Tambaram, with the bus slow in arriving, we hopped onto an auto rickshaw to Ilango’s home in the suburb of Sembakkam. 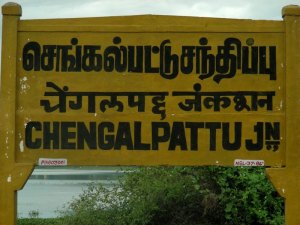 Situated directly behind Ilango’s apartment is a delightful small park, an oasis within the vast, urban sprawl, with a water fountain in its midst. Adjacent to the park is the Catholic church of St Joseph’s, also known as Mahalakshmi Nagar church. It’s a large, whitewashed complex with an adjacent hall. A service was in progress as we walked by, the congregation spilling out onto the tarmac at the front of the church. A wonderful sound emanated from within, as worshippers burst into harmonius chorus during the service.

Back at the apartment, Ilango called Murugesan to fetch me. It’s a strange experience being ferried to and fro but it’s the safest option for foreign, who would struggle to come to grips with India’s chaotic driving culture. As my final weekend in India drew to a close, I reflected on the 5 weeks I had been here. Taking the best with the worst, it had been a memorable experience.

*** Watch the YouTube clip of Ilango and I riding up Sembakkam’s High Street in an auto rickshaw – one thing I simply had to do! ***