Australia’s Channel 9 News reported on 8th January 2012 how a young Australian woman plunged into crocodile-infested waters after her bungee rope snapped after a jump from the Victoria Falls bridge above the Zambezi River, Zimbabwe. She said she had to swim with her feet tied together to the Zimbabwe side of the water, and had to free the cord when it got caught on rocks.  View the clip.

Ironically, in the mid-1990’s, whilst on a Whichway Adventures tour from Cape Town to Nairobi through several African countries, I chickened out of doing this very same bungee jump at Victoria Falls Bridge.

This is what I wrote at the time:

After acquiring some Zim dollars at the bank, I went off at about 11h30 to watch those who had elected to do the bungee jump. In all, Faff, Chris, Jo, Mark, Nic and Aviette from our tour group did the jump. A great sense of team spirit prevailed. I took some photos beforehand and also used the motor-drive during some of the jumps, so as to create a sequence of shots. The tension was clearly evident as each one took the plunge, which was soon followed by elation and enormous relief at having completed it successfully. The organisers used their experience in preparing each participant psychologically for the jump. On occasions this involved some humour for light relief: “If the rope snaps and you end up in the water, then remember to swim for the right embankment to avoid the crocodiles!”

Shearwater Adventures, the tourism company which also organised the bungee jump and whitewater rafting activities way back then and now, during the recent incident, voluntarily suspended bungee activities at Victoria Falls, whilst the accident involving the Australian tourist is being investigated.

The magnificent Victoria Falls are at a height of 128m. The location is known as ‘The Devil’s Swimming Pool’.  During the months of September and December, people can swim as close as possible to the edge of the falls without falling over! These falls are becoming well known amongst the ‘radical tourist’ industry as more and more people search for the ultimate experience. 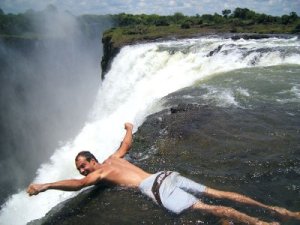 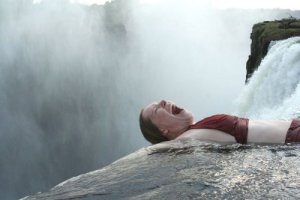 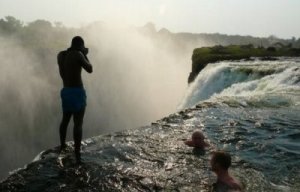