It was sometime towards the end of January, 2012, that Martin Lighten put the word out that a hiking trip was being planned to Loch Ossian in the highlands of Scotland, following in the footsteps of Dave Ashby, who had done it the year before. The narrow loch, about 5km long, situated north-east of Glencoe and some 30 miles by road to Fort William, lies on the north-eastern edge of Rannoch Moor. Despite the existence of 4-wheel drive dirt roads into the area, the Youth Hostel on the western end of the loch on the Corrour Estate, is best reached from Corrour Railway Station, a railway station on the West Highland Line, which passes some 2 km from the loch. There’s no doubting the claim that this line is considered the most scenic railway line in Britain, linking the ports of Mallaig and Oban on the west coast of Scotland to Glasgow. 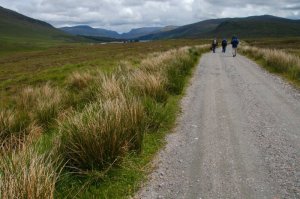 The long walk from Corrour Station to Loch Ossian 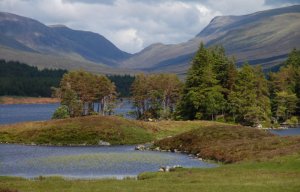 With bookings on the overnight Caledonian Sleeper to Glasgow Central secured, departure was set for Monday night, 18th June, at 23h50, from Euston Station, London. Meeting slightly prior to heading out, we were able to quench our thirst at a nearby pub beforehand. Once confined to the tiny two-person compartments after being greeted at the station by the somewhat grumpy train conductor who enquired: “What would you like for breakfast? Tea or coffee or juice?”, we had little option but to turn in for the night. 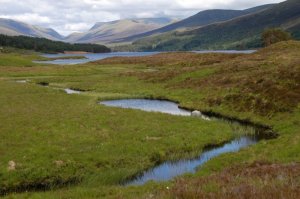 Setting off on our first walk – view of Ossian Hostel

Arrival in Glasgow around 7h20 the next morning proved too early even for any restaurants within the station complex, as well as the connecting bus service to Glasgow Queens station, so we stopped off for a coffee and a sandwich at Starbucks across the road. The neat station was familiar to me, having travelled here some years before to visit Archie and Madge, elderly relatives of mine, Archie being the son of my Scottish grandmother’s brother, who perished in the 1st World War, with Archie still only at the tender age of one.  We boarded the train which, for the next 3 hours, wound its way into the highlands, passing by Loch Lomond and stretches of the West Highland Way path, triggering a moment of reminiscing from John and Tim, who did the walk together the year before.

View of Ossian Hostel on the ascent of Beinn na Lap

With boil-in-a-bag provisions and wine for the next four days loading our rucksacks, upon arrival around midday, we trudged the dirt road from the now sadly deserted station building to the Youth Hostel, meaning that bacon butties and tea at the station cafe would not be materialising. Few scenes arguably rival that of the approach to the youth hostel nestled under birch and rowan trees, with a view of the loch and the mountains beyond. Checking in with Jan, the hostel manageress, who confessed to being a Maoist in her student days, we were then given the bad news of the day which we hadn’t been expecting. The pump that provides water to to the hostel from the middle of the loch had given up the ghost, implying that water had to be collected by hand. 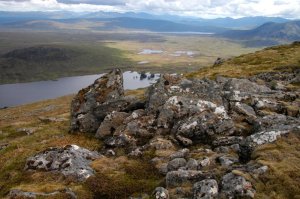 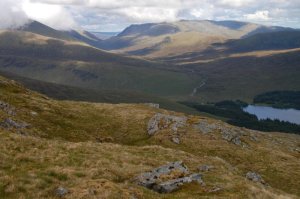 Looking east towards the mountains we were to climb on Day Two.

View across Loch Ossian south-west, in the direction of Glencoe. 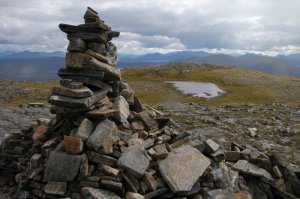 Our first Munro of the trip – Beinn na Lap, at 935 metres

Prior to departure I had posed the question of availability of drinking water to the group, thinking that it had been a daft question – turned out this wasn’t the case, as the water in the loch is, by and large, relatively stagnant. Furthermore, the lochs are at elevations that are not high enough above land where sheep tend to graze. An e-mail from Jan to Martin ran as follows: “The drinking water situation is complicated. The water was tested by Highland Council last year, and found wanting! So I have warning signs up in the hostel, and technically guests should boil water for drinking. This is easy done, and then you can let it cool overnight and fill water bottles etc. I have done dip slide tests on a regular basis since we had the tanks completely disinfected by Rentakil in January, and they’re completely fine. But the water hasn’t been officially retested yet”. A further inconvenience but one that nature itself was responsible for, is that of the Highland midge, a pesky little insect with a wingspan of 1.4 mm, that lays eggs in the boggy and acidic ground that provides an optimal environment for breeding. 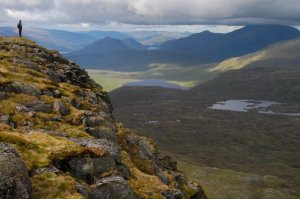 Tim surveys the magnificence of the Rannoch Moor countryside 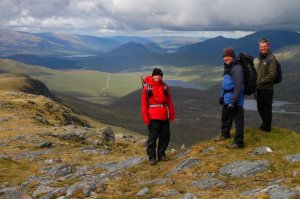 A last tea break on the descent, taking in the views.

Well, one saving grace was that it wasn’t raining. We unpacked, settled in and had a cuppa before deciding not to waste the remainder of the day and promptly set out to bag our first Munro of the day. A Munro is a mountain in Scotland with a height over 3,000 ft. They are named after Sir Hugh Munro, 4th Baronet (1856–1919), who produced the first list of such hills, known as Munros Tables, in 1891. As of the 2009, revision of the tables, published by the Scottish Mountaineering Club, there are 283 Munros and 227 further subsidiary tops. The most well known Munro is Ben Nevis, the highest mountain in the British Isles, with an altitude of 1,344 metres.

Beinn na Lap, at 935 metres, lies just to the north of the loch. As expected, the lower reaches are boggy and it’s a bit of s slog but improves higher up. The views from the top of Ossian and the landscape beyond turned out to be a real treat and well worth the effort in getting there, with the weather being an additional bonus. That’s what makes this place special – it’s 360° of wilderness as far as the eye can see.

It was still light by the time we made it back to the hostel. I took a much-needed splash and wash in the loch, safe from a midgey onslaught, due to the slight breeze that had picked up. We were the only guests to have booked in on out first night, so we had free reign in the kitchen. After our boil-in-the-bag dinner and pud doused in thick custard (making Martin intensely jealous), downed with a glass or two of red wine, we hit the sack for the night.

Click here to view the GPS tracks for all three routes.

The western side of Loch Ossian and the hostel bathed in late-afternoon sunshine.

Returning to the hostel at dusk.

John, Tim and Martin back at Ossian Hostel – first Munro out of the way!

Loch Ossian circuit from Corrour [Outdoor Capital of the UK] 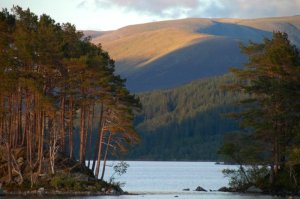 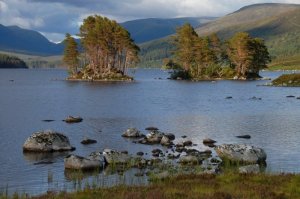