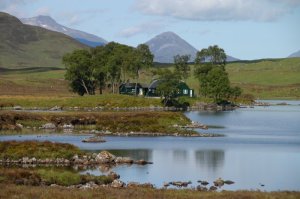 Dawn on day two at Ossian and the midgeys at the water’s edge were ferocious. Whilst the others boiled an assortment of boil-in-the-bag breakfasts intended to make my mouth water whilst offering me the remains of the pot noodles, I was content with the simplicity of muesli and soya milk. By and large we had had the hostel virtually all to ourselves, with a large contingent of school kids expected later in the day. The plan for the day was to tackle three Munros lying to the east of Loch Ossian. We set off on the Wednesday morning in that direction, heading for higher ground above the plantation, slightly away from Loch Ossian, which itself lies at roughly 390 meters ASL, until we reached Peter’s Rock along the path, so-named as a memorial to a young man, 29 years of age, who knew the area. 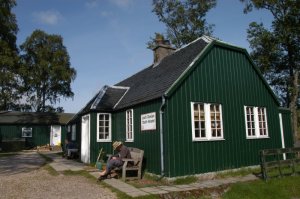 Ossian Hostel on the Corrour Estate – John prepares for the walk. 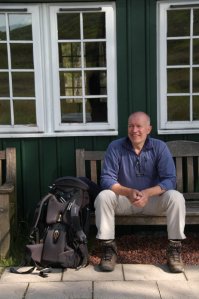 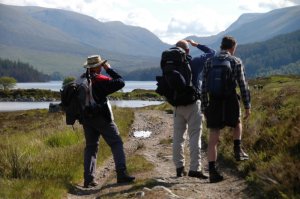 Setting off – looking for the path. 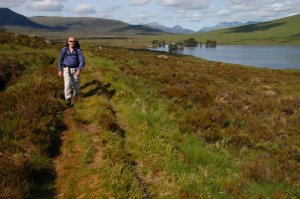 View along the path towards Ossian Hostel. Ben Nevis lies in the distance to the right.

Forestry has played a big part in the history of Corrour Estate which was even owned by the Forestry Commission for a brief period. The original Lodge was built in the early 19th century and the sporting estate was further developed by Sir John Stirling Maxwell who bought it in 1891 following the arrival of the railway. Sir John was active in the founding of the Forestry Commission in 1919 and the National Trust for Scotland as well being active in the Scottish Youth Hostel Association. He was also responsible for pioneering the growing of conifers on peat, which has resulted in large areas of forestry throughout upland Scotland.

Soon after that we headed up a boggy, slope with no clear path in sight, covered primarily in heather, which proved tough going, until we reached a plateau where we stopped for tea. Martin had wanted to stop earlier but the urge to get as high up the mountain proved strong. We continued the upward if rather unspectacular climb, swinging south-east, until we reached Carn Dearg (Red Hill), at 941 metres. We stopped at the cairn to enjoy the sunshine and take in the views, in particular Blackwater Reservoir, lying directly to the south-east. It is splendid countryside, rugged and unspoilt. 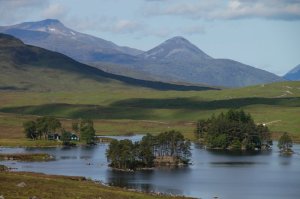 Loch Ossian hostel nestled amongst the trees on the edge of the loch from which it takes its name. 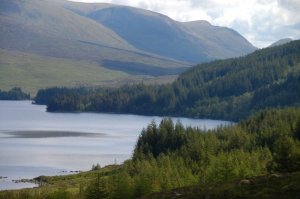 Across Ossian Estate and plantation 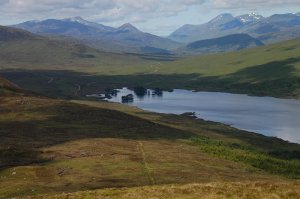 View across Ossian on the ascent – the flat lump of Ben Nevis can be seen in the distance, to the right, with the Mamores on the left. 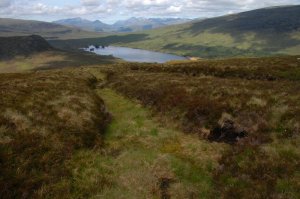 The boggy hillside covered in heather makes for tough going.

To reach the second Munro of the day, Sgor Gaibhre (Peak of the Goat), clearly visible at 955 metres, required a descent over the bealach at Mam Ban,  to roughly 720 metres, before taking a path directly up to its summit. Clouds had moved in to darken the skies. We stopped for lunch at the cairn, a flatter arrangement of stones those at Carn Dearg, surrounded, curiously, by a rather sandy area somewhat sparse in vegetation.  Preceded by a similar drop to just over 800 metres and we were then up on the summit of yet another Munro, that Sgor Choinnich, slightly lower, at 929 metres ASL.

Some walks exclude this peak but take in Beinn na Lap, which we had completed the previous afternoon. The rain set in, curtailing any further photographic activity for the time being and we wasted no time heading down the hillside towards Loch Ossian, crossing at a bridge near the forest at the Corrour Estate visitors cottages, named after the peaks we had just climbed. 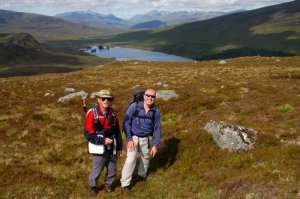 John and Martin bound tirelessly up the heather-clad slopes towards Carn Dearg. 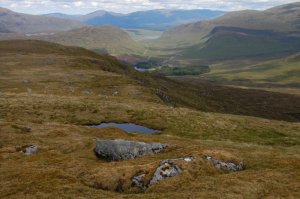 Approaching the summit of Carn Dearg with Srath Ossian lying to the north. 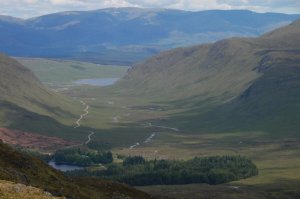 View north along the corridor of Amar Srath Ossian, with Loch Ghuilbinn beyond. 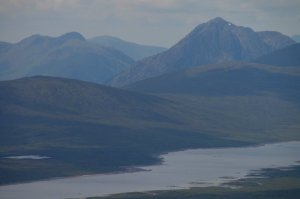 From the summit of Carn Dearg towards Blackwater Reservoir

It was during a conversation with someone whilst waiting for a train at Corrour Station, upon our return home later that week, that we learnt that the Estate belongs to the eldest daughter and heiress of the Tetra Pak empire, Lisbett Rausing, a conservationist who lives on the 48,000-acre estate Highlands estate and donates millions of pounds to wildlife charities. It was her sister-in-law, Eva Rausing, wife of Hans Kristian Rausing, who was found dead in a Belgravia flat in central London.

According to references I found online, the old lodge burnt down in 1942 and following a change of estate ownership to Lisbet Rausing, the new grey granite and glass lodge was completed in 2003. Looking a bit like the lair of a baddie in a James Bond movie, the building was designed by architect Moshe Safdie, who also designed the iconic Jerusalem Holocaust Museum. 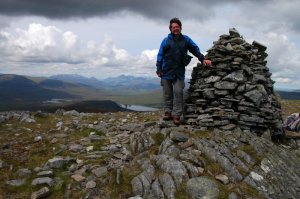 C’est moi at the cairn on Carn Dearg. 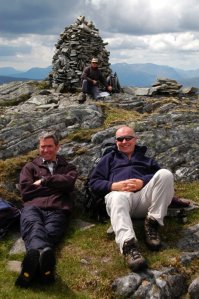 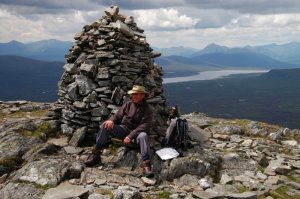 John on the first Munro of the day, Carn Dearg and loving it!

The Munros of Scotland are known for presenting challenging conditions to hikers, particularly in winter when a number of fatalities are reported each year. Nevertheless, a popular practice amongst hillwalkers is “Munro bagging”, the aim being to climb all of the listed Munros. It’s a serious business and obviously an activity for folk with an inordinate amount of time on their hands.

It was in the course walking back along the edge of the Loch back to the hostel that we passed the school kids who were stay there that night. We learnt later that they were from an autistic school and were in the process of walking around the loch after arriving in the afternoon. They posed no problem to us and the teachers in attendance showed an obvious dedication to their work. We waited until they had completed their dinner, before we took over in the kitchen. Once again it was to be an early night, as the next day would prove the longest, most demanding and arduous walk of our trip.

Click here to view the GPS tracks for all three routes. 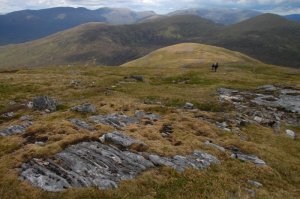 Setting off from Carn Dearg towards Sgor Gaibhre, on the right, across Mam Ban. the path up to the summit can clearly be seen. 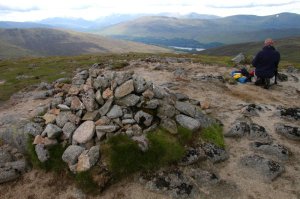 View from the cairns on Sgor Gaibhre – time for lunch! 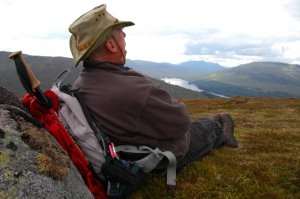 John finds the day a trifle drawn out!

The Osian Munros and Corbetts

Accommodation on the Corrour Estate

An account and route map of a similar walk 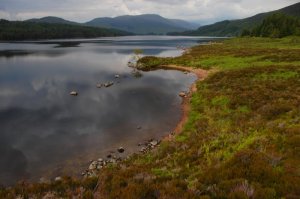 Calm waters on the edge of loch Ossian

View across Ossian on the return – day two. 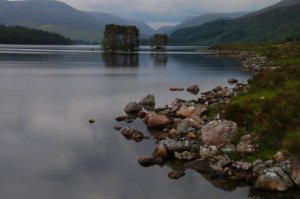