I had learnt that the mountain known as Croagh Patrick at a height of 764 metres, which overlooks Clew Bay in County Mayo, is considered the holiest mountain in Ireland. The tradition of pilgrimage to this holy mountain stretches back over 5,000 years from the Stone Age to the present day without interruption. Its religious significance dates back to the time of the pagans, when people are thought to have gathered here to celebrate the beginning of harvest season. I had learnt from Linda Newman, proprietor of the Croagh Patrick Lodge B&B I had checked into upon arrival in Murrisk, County Mayo, having driven up from Connemara, that an Irish Roman Catholic farmer was also expected as a guest, the sole purpose of his stay being his intention to climb the holy mountain on the Sunday morning to raise money for his local church charity. 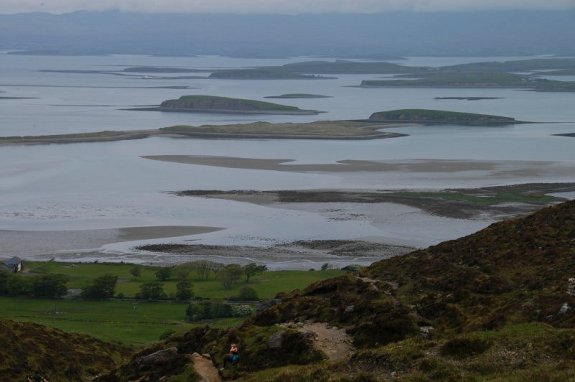 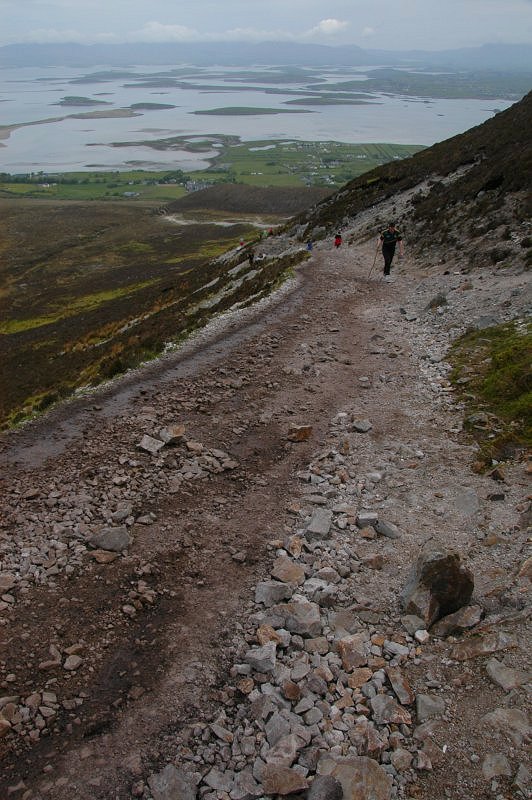 Unrelenting first section of the walk leading up from Murrisk. 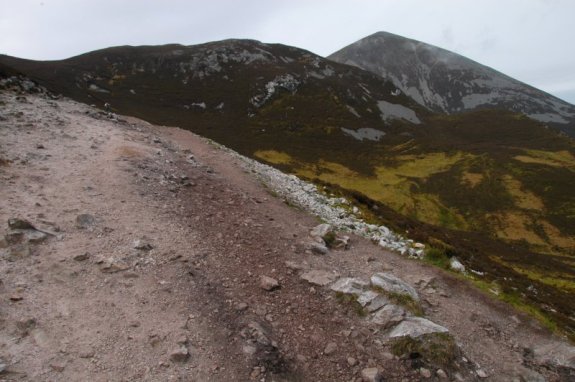 I met him at breakfast the next morning. He was expecting to be joined by compatriots from his home county but owing to the fact that he had been suffering from back problems for some time, he was keen to get a head start ahead of the others. We set off together sometime from the hostel after 9 to the car park a short distance away, the route commencing in earnest at the statue of the saint. It is a steady climb to begin with along a well worn path, until a plateau is reached which brings some relief, before the final ascent up a path which has been described as “an area of scree, quartz-like gravel that conspires against you finding a decent foothold”, as any loose rock constantly shifts under one’s feet.  Just when you think the summit is near, it is an illusion, as Croagh Patrick has one final card in the pack to play. The path turns sharply to the left and a further scree section previously out of view suddenly appears. Rather than dampen the spirits, I found it only served to spur me on. 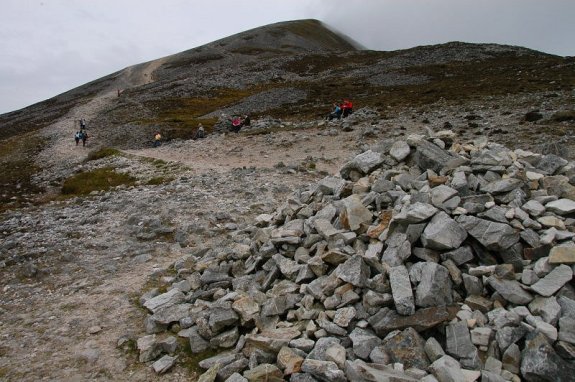 The cairn marks the spot where the path steepens once more, as one views the summit of Croagh Patrick. 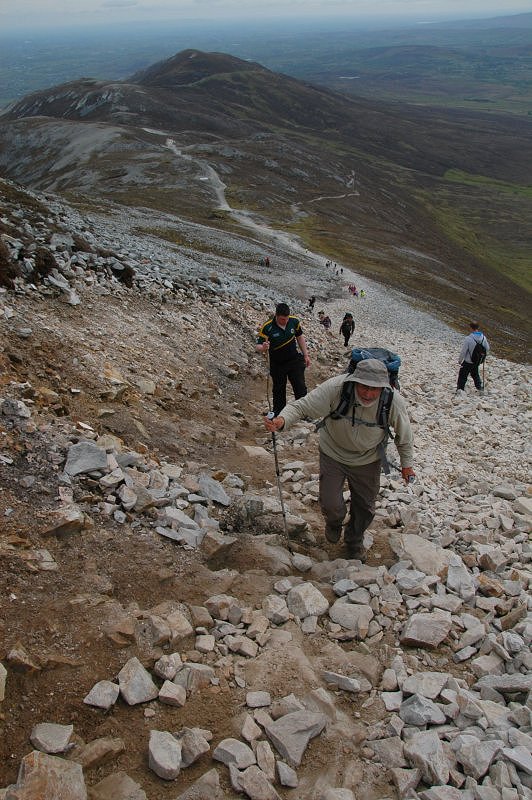 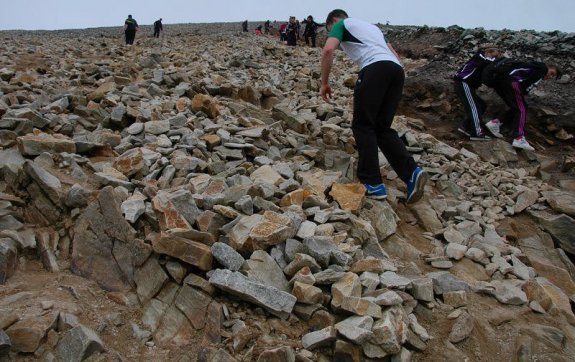 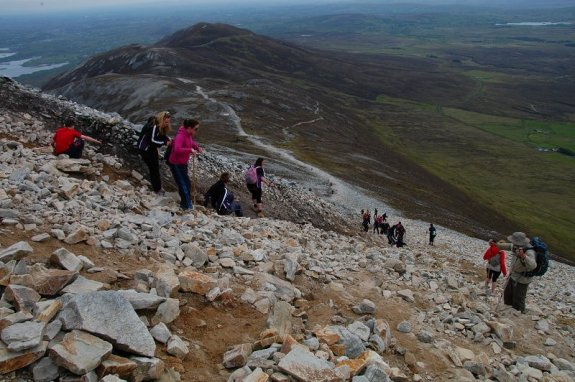 The route above the plateau has been described as “an area of scree, quartz-like gravel that conspires against you finding a decent foothold”.

Croagh Patrick has been a site of pilgrimage, especially at the summer solstice, since before the arrival of Celtic Christianity. Saint Patrick reputedly fasted on the summit of Croagh Patrick for forty days in the fifth century and built a church there. Popular legend says that at the end of Patrick’s 40-day fast, he threw a silver bell down the side of the hill, knocking the she-demon Corra from the sky and banishing all the snakes from Ireland. Well, Saint Patrick may have built a church there but the modern-day version turned out to be in serious need of a paint job. I overheard someone say that it was a disgrace and that the state should do more.  The views to the north of Clew bay dominate the skyline. It is only when one reaches the plateau that Connemara comes into view. Clew Bay is a natural ocean bay in County Mayo, Ireland. It contains Ireland’s best example of sunken drumlins and there are literally hundreds of them strewn across the bay off Westport. According to tradition, there is an island in the bay for every day of the year. 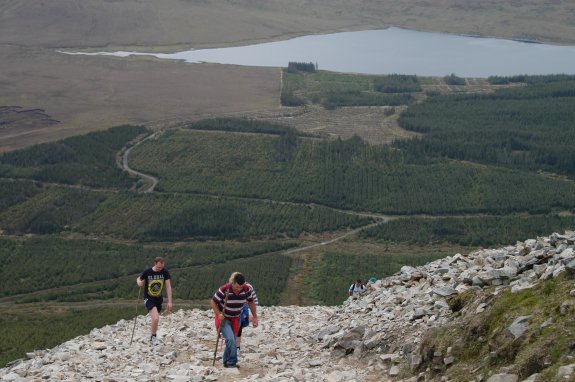 Just when you think the summit is near, a bend appears in the path. 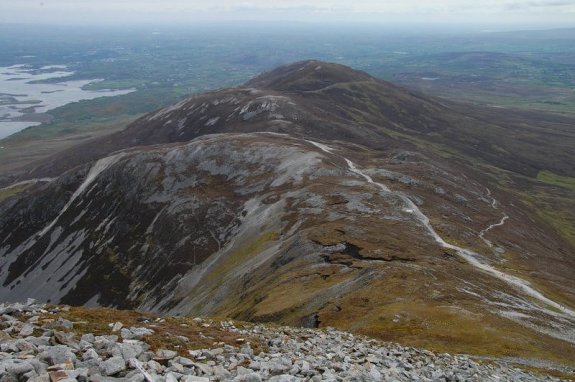 The rump of Croagh Patrick, where the first section merges into the plateau. 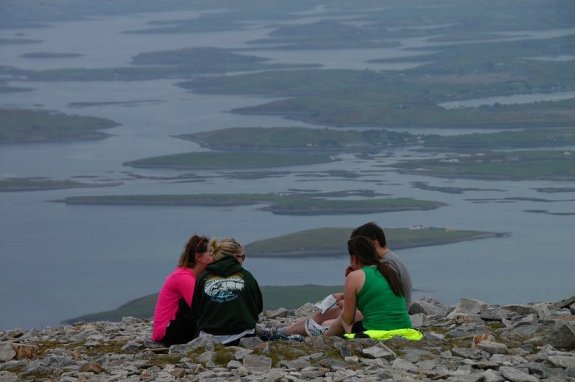 Enjoying the view of Clew Bay before the descent of Croagh Patrick. 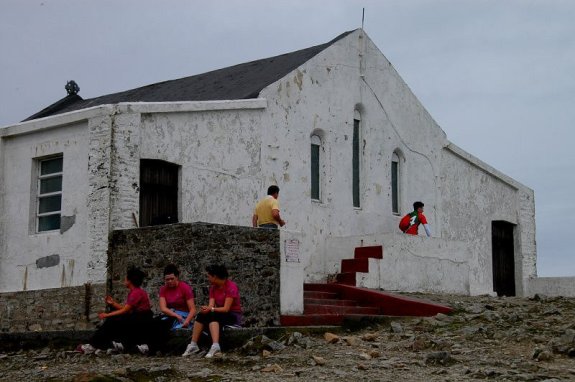 A church on the site where Saint Patrick reputedly fasted on the summit of Croagh Patrick for forty days in the fifth century.

The air was starting to cool somewhat, so after a tea, it was time to set off on the descent, with some trepidation, I might add. This would be a real test for the torn cartilage in my left knee. I discovered that the best way was to approach that loose stones slightly side on, as skiers do when descending a slope. Before I knew it I had reached the plateau and the worst was over. By this time, my farmer friend had begun to encounter his compatriots and was being held up as a result. Not wishing to be flippant, I’ll bet a significant number of Hail Mary’s were more than likely being exchanged. It was around midday and by this time the numbers had swelled substantially. Some seemed in no fit state to slog it out up the mountain but slog it out they did, all shapes, ages and sizes. 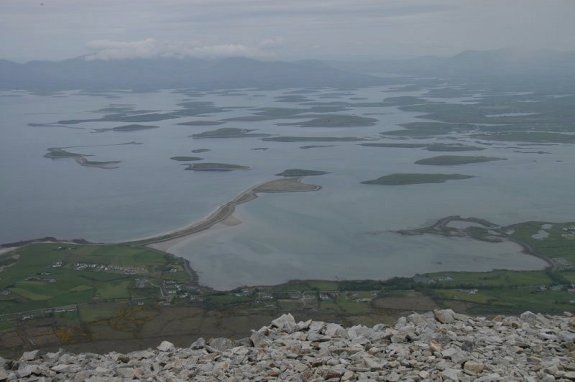 Clew Bay contains Ireland’s best example of sunken drumlins and there are literally hundreds of them strewn across the bay. On the far side, the mainland joins onto Achil Island at Achil Sound. 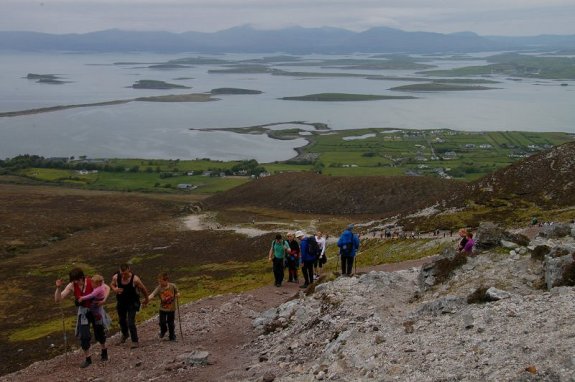 Still they appear in droves, young and old alike, drawn by the holiest of mountains. 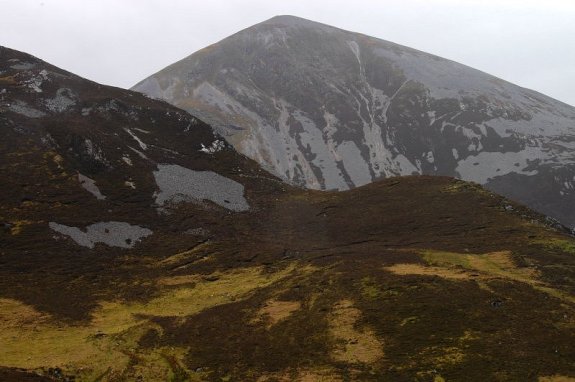 On the descent, one last glimpse of the summit. 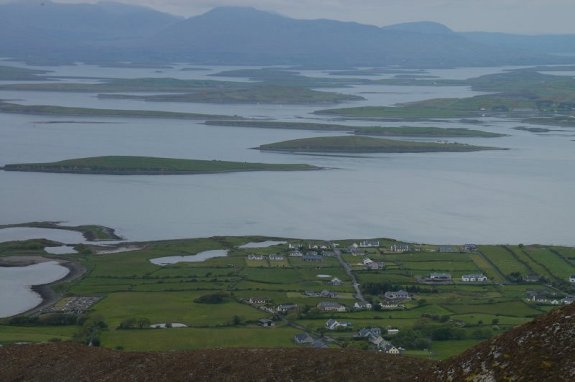 View across Clew Bay towards Mallaranny, dominated by Glennamong. In the foreground, Murrisk.

Although it wasn’t yet Reek Sunday (or Garland Sunday), the last Sunday in July, some climbers were attempting the yomp barefoot.  I stopped to take some photographs and my friend from the B&B caught up with me once more, just before we reached the statue. He jokingly asked if we should turn around and do the walk again. I responded wryly that I would politely decline the request, given that I wasn’t Catholic. I don’t know if he saw the funny side of it.  A truly beautiful scene played out as some young kids waited excitedly for their mother (who was obviously doing the walk for charity). Just as she appeared, the screamed and held up a banner with the words: “Well done, mother, we our proud of you”. It was extremely touching and brought a tear to my eye. 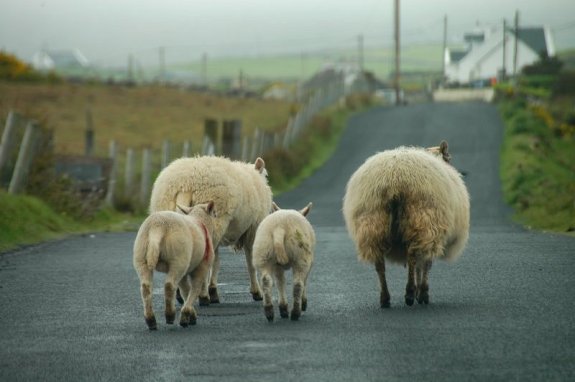 Being held up by local folk on the Atlantic View road, County Mayo. 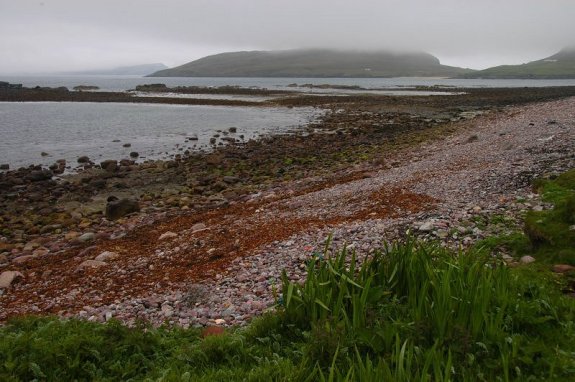 Atlantic View Drive: Across to Achilbeg Island – in the distance, Clare Island, which dominates the entrance to Clew Bay. 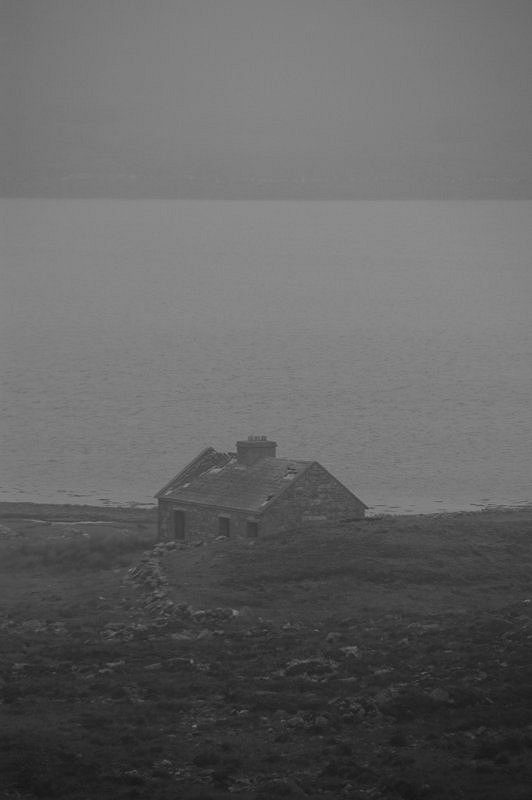 Ruin on Atlantic View with Achil Island across the waters of Achil Sound. 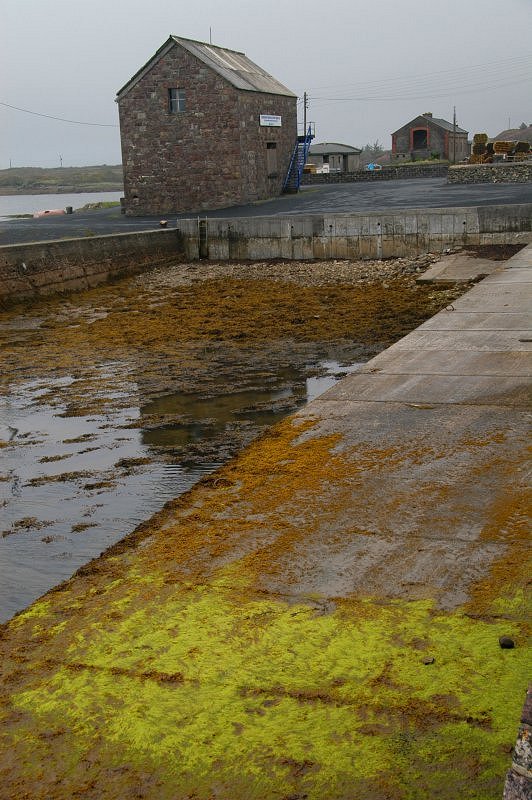 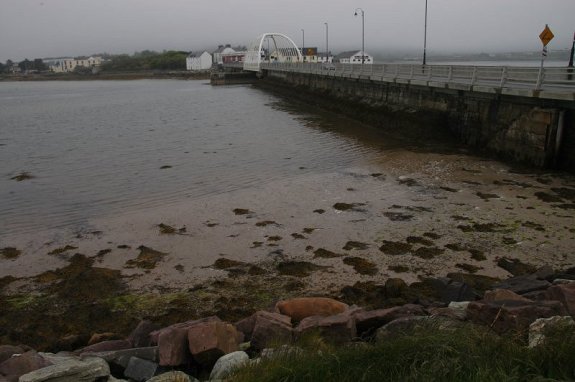 The bridge across Achil Sound.

After a rest back at the B&B during which time I dozed off, I thought about how best I would spend my remaining time, as I had only a day and a bit left. I looked at the map and my mind was made up. I headed north via Westport and Newport through rural countryside to Mallaranny along the N59. Visibility was poor. The mist was as thick as pea soup as I turned off on the coastal road known as Atlantic View as opposed to taking the R319.  Sadly, I could not see much of the lower ground or Clew Bay, let alone the peak known as Corraun Hill (524 metres), which dominates this section of the coastline. Atlantic View it might be however there was no view to speak of.  I stopped as the road swung north, whereupon it would hug the coastline along the edge of Achil Sound, the waterway separating the mainland from Achil Island. Here, from the vantage point of a little beach strewn with the fishing debris, I looked across at Achilbeg Island and Clare Island, which dominates the entrance to Clew Bay, just visible in the distance.  I reached the point on Achil Sound where a bridge joins the island to the mainland. 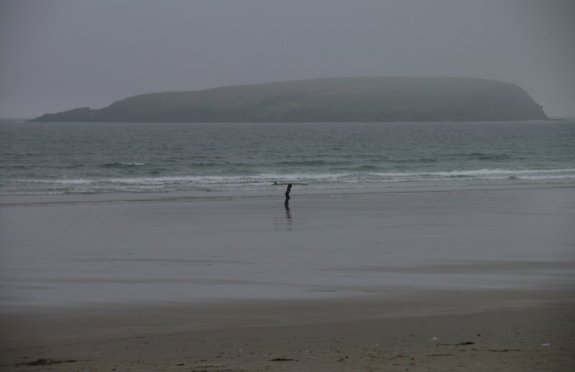 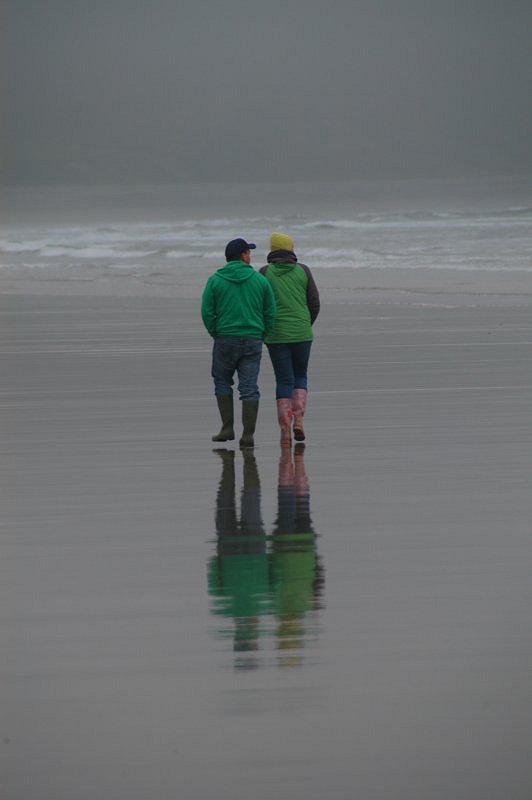 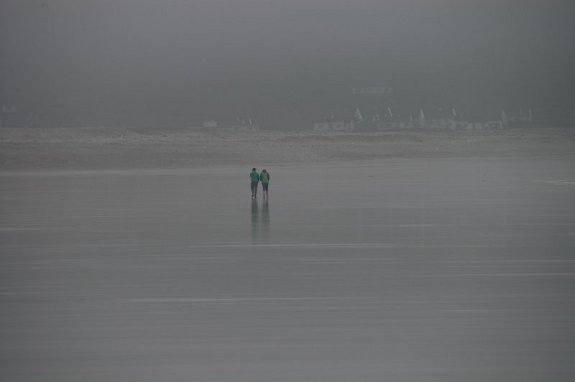 The Atlantic View route continues around Achil Island proper however with visibility as it was, coupled with uncertainty as to how the light would hold out, I chose to take the more direct route. Passing by a golf course that extended almost to the shoreline, as well as a caravan and camping site, on the outskirts of a village called Keel, I drove down to a long curved stretch of white sand known as Trawmore Beach. It is bound in the east by a mountain known as Mweelin and the Menawn Cliffs; in the west, beyond Keel, by the highest cliffs in Ireland and Great Britain, Croaghaun, at 688 metres and to the north, by Slievemore, the highest peak on Achill Island, at an elevation of 671 metres. Despite the danger signs warning of strong currents, a group of surfers, their wetsuits reflecting off the moist sand, headed out, unperturbed, into the waters.

The mist hung low in the bay. It was a setting of extraordinary coastal ruggedness and beauty, remote and desolate, melancholy perhaps, where a writer might confine himself to his beach cottage penning his next great novel. In fact, German Heinrich Böll, who won the Nobel Prize for literature in 1972, carved out a career as a journalist and writer, made his first visit to Achill in the late 1950’s. Throughout the 1960’s and into the 1970’s, Böll lived and worked in Achill, residing in a cottage in the village of Dugort. His book Irische Tagebuch (Irish Journal) is well known and recounts some of his experiences of Achill. The Böll Cottage in Dugort has been used since 1992 as an Artist’s Residence. My interest though, was limited to the mountains in this remote corner of Ireland. 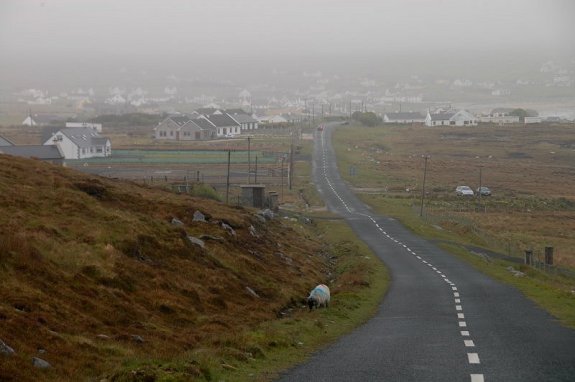 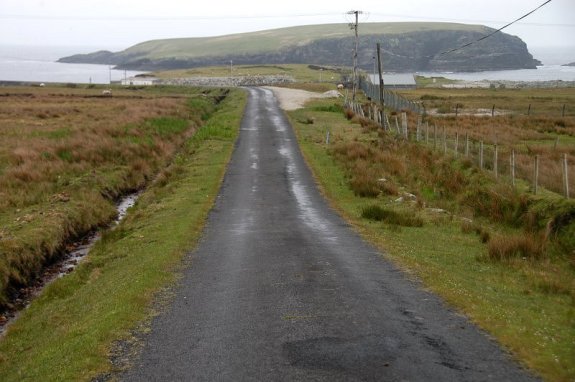 Towards the quay overlooking InishGallon. 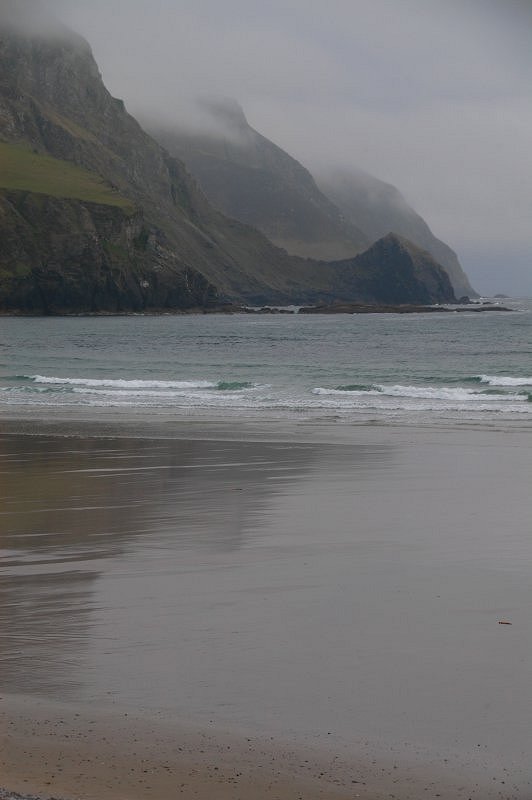 Dooagh, a village that exists in the shadow of Croaghaun though presently still shrouded in thick cloud, comprised numerous, white-washed cottages that reminded me of places like Arniston in the Western Cape South Africa. If there were a bit of sunshine, it would be quite a pleasant place, I imagined. The road beyond the village climbed quite steeply and narrowed considerably, not unlike the winding  ascent up a mountain pass. I instantly felt uneasy and out of my comfort zone. I had no real notion of where the road was leading to at that point, on this peninsula dominated by Croaghaun, so I turned the vehicle around. Crooagh boasts the last pub and coffee shop Gielty’s, the most westerly in Ireland, so not stopping was simply out of the question. The watering hole was a cacophony of sound as I entered, so I made my way to the small, adjacent coffee shop, where I ordered a large cappuccino. After a brief stop at a rather uninspiring beach at Dooagh and a drive down to a quay that overlooked a tiny island known as InishGallon, it was time to head for home, well, my B&B, at least. 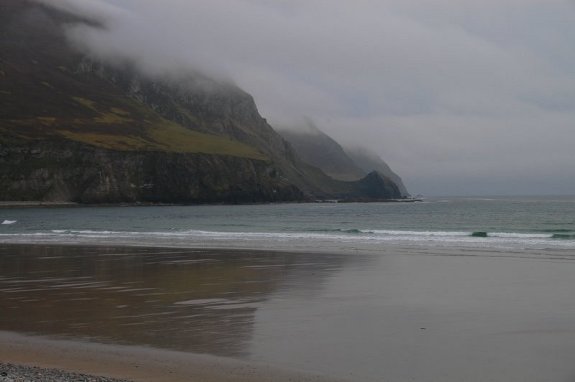 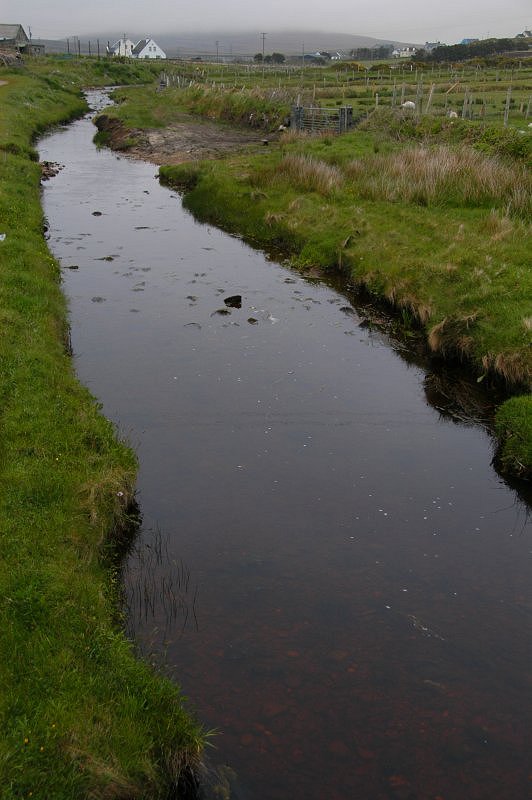 And a river runs through the Achil Island countryside. 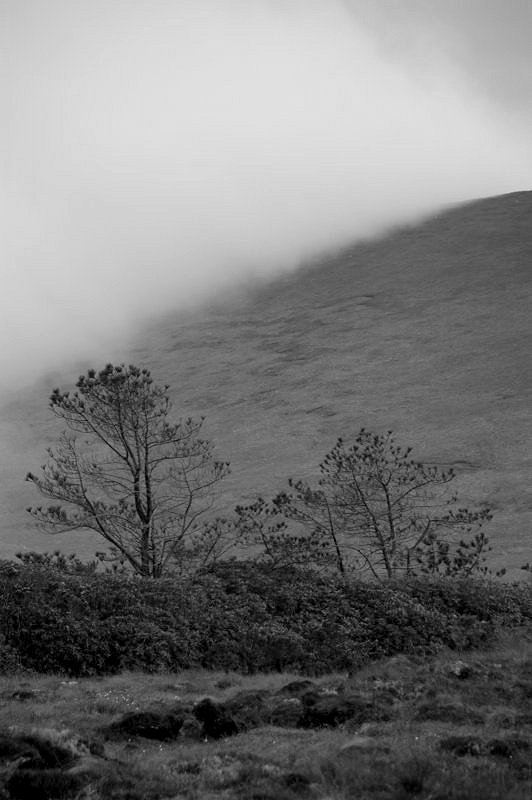 The mist descends on Achil. 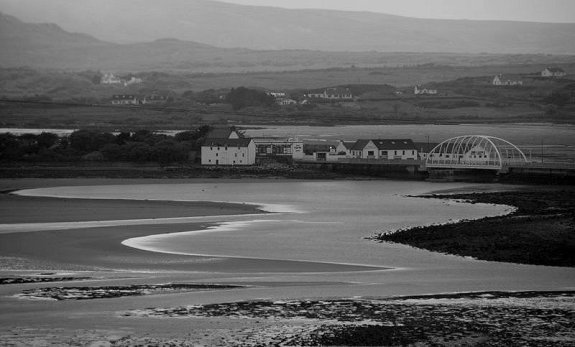 As the mist began to lift, sections of Mweelin began to appear, presenting a magnificent view towards the Cliffs of Menawn and Dooega Head, so I simply had to get a bit closer to photograph it. I managed to find a road that led to the far end Trawmore Beach. Returning to the Achil Sound Bridge crossing, I retraced my route once more along Atlantic View (mainland). Though the light had faded significantly, visibility had improved and I could see across Clew Bay to Croagh Patrick. Arriving at 22h00 in Westport, it dawned on me that I had not had a decent meal since breakfast. It was not unusual therefore at this late hour to find myself in an Indian restaurant having a curry, though I revealed my ignorance when I discovered that the waiters were in fact Bangladeshi.

This is Achil – a blog [makes good reading]

Walking Mweelrea – blog (this would be my preferred route)