The city of Kingston upon Hull, abbreviated to Hull, located in the north-east of the United Kingdom, is basking in its status as the city of culture for 2017. It lies upon the River Hull at its confluence with the Humber estuary, 25 miles inland from the North Sea. The town of Hull was founded late in the 12th century. It was an early theatre of battle in the English Civil Wars. After suffering heavy damage in the Second World War, Hull weathered a period of post-industrial decline. Hull is a city redefining itself as it shakes off its industrial past. The grittiness of that era is however still very much in evidence. The economy of Hull was built on trading and seafaring, firstly whaling and later seafishing.

Renowned American guitarist Pat Metheny had been invited to headline Hull Jazz Festival’s 25th anniversary, so it was for this reason that I journeyed by train from Hertfordshire to attend the concert. The quartet comprised UK pianist Gwilym Simcock joining the brilliant Malaysian-born bassist Linda Oh and long-time Metheny sidekick, drummer Antonio Sanchez. A Romanian jazz band busking in the town centre seemed to set the tone for the friendly atmosphere I experienced from locals proud of its current status. Even the weather, crisp but sunny and dry, decided to play ball, for the time being at least.

The box office at the City Hall doubles as a tourist office, so I decided to explore the historic Old Town, Hull Marina and Museum Quarter along what is known as the Fish Trail Route. Hull boasts a diversity of interesting architecture, in particular along a narrow street at the bottom of Whitefriargate known as The Land of Green Ginger. Hull Minster, which dates back to about 1300, contains what is widely acknowledged to be some of the finest mediaeval brick-work in the country. A truly stunning and beautiful building, it is the largest parish church in England by floor area. I had timed my visit well, as the church was hosting an open day, not only as part of the culture celebrations but also in preparation for the Armistice Day commemorations signalling the end of WWI. In one of the wings of the minster, a kitchen had been set up where tea, coffee, cakes and soup were being sold. In another section, a remembrance sculpture created by Martin Waters, of figures covered in poppies, representing fallen soldiers, took pride of place. Currently, as part of the 2017 celebrations, Trinity Square outside Hull Minster features an art installation comprising 16 six-metre high steel columns clad in galvanised steel mesh, placed in a grid.

Hull is a city renowned for philanthropist William Wilberforce, born in a house on the High Street. He began his political career in 1780, eventually becoming an independent Member of Parliament for Yorkshire (1784–1812). In 1785, he became an Evangelical Christian, which resulted in major changes to his lifestyle and a lifelong concern for reform. Wilberforce was persuaded by a group of anti-slave-trade activists to take on the cause of abolition, and he soon became one of the leading English abolitionists. He headed the parliamentary campaign against the British slave trade for twenty years until the passage of the Slave Trade Act of 1807. Hull’s Museum Quarter, on the High Street in the heart of the Old Town, consists of Wilberforce House, the Arctic Corsair, the Hull and East Riding Museum and the Streetlife Museum of Transport. 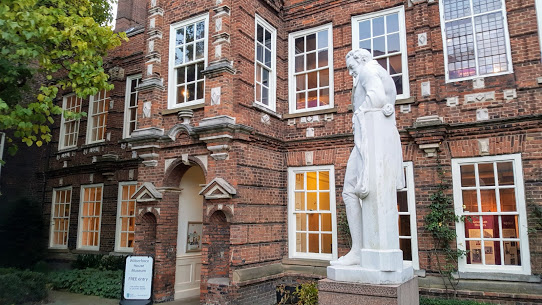 My accommodation for the night was the Hull Trinity Backpackers, located on Market Place, just around the corner from Hull Trinity Minster and Square. I secured a bed in a 4-bed dormitory-style room with ensuite bathroom, which I had all to myself, as it transpired. It turned out to be clean, perfectly situated and fantastic value for money. The proprietor, Glen, based in Sheffield although originally from Hull itself, secured the business a year ago. You couldn’t ask for a nicer, friendlier host. Preceding the concert I was attending was a parade of street performers dressed as giant creatures weaving their way through the city early Saturday evening, as part of the City of Culture 2017 arts festival, the procession aptly named The Land of Green Ginger Unleashed. 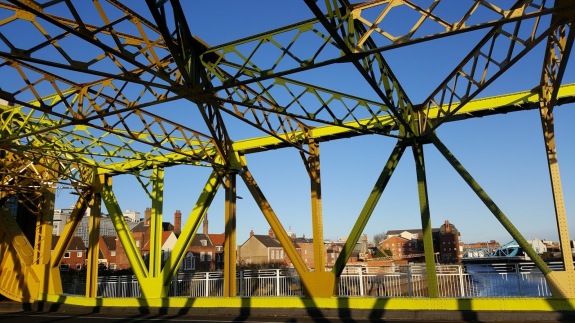 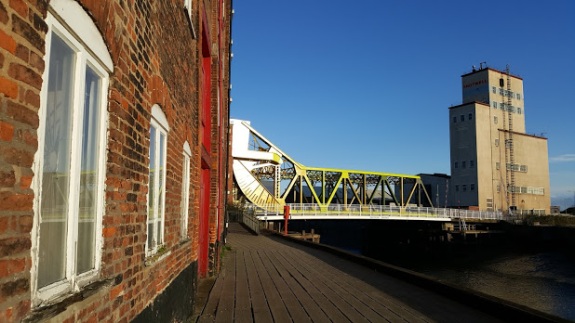 The colourful facelift of Drypool Bridge, created by artist Sarah Daniels, was inspired by the work of 19th century Hull-born mathematician and philosopher John Venn, to reflect the city’s links with the internationally-renowned Venn Diagram.

Like most cities in the north-east, Hull truly comes alive at night, as locals party the night away in a variety of bars and clubs around the city. Whilst cosmopolitan London and other larger cities has experienced a dilution of its traditional English population, demographically speaking, Hull seems to me like stepping into another world. As one examines the features of many of the locals one might pass by in the street, you could be forgiven for thinking you might be in Scandanavia. There may of course be no substance to this theory.

The Viking kingdom, Danelaw, covered almost the whole of the north and east of England, with three main areas: Northumbria (which included modern-day Yorkshire), East Anglia, and the Five Boroughs of Leicester, Nottingham, Derby, Stamford and Lincoln. The most important city in Danelaw was York, or Jorvik.

I was blown away by the mere 24 hours I spent in this north-eastern city. A cultural heritage intertwined with its gritty industrial past, Hull beguiles and charms. 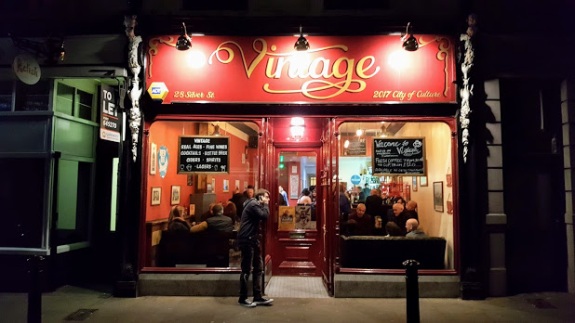