Progressive rock band YES embarked on a 50th anniversary tour for March 2018. Subsequent to my booking for one of two shows at London’s hallowed Palladium, a prime seat in C row middle became available for the Bridgewater Hall concert in Manchester, which I found hard-pressed to pass up on. Attending several shows is not an unusual idiosyncrasy amongst the YES fanbase. After a positive AirBnb experience in Berlin, I opted for the same on this occasion, coupled with the decision to travel up by coach Saturday, back on Sunday, in order to keep costs to a minimum. A return of the extreme weather conditions associated with the Arctic Beast lashing the United Kingdom once more in the space of a week, may have resulted in some logistic issues however it all panned out well in the end, despite the early 5 o’clock start Saturday with a 6 a.m. train into the capital.

The Megabus journey from London Victoria to Shudehill coach station takes about 4 and a half hours. The music from the concert I was attending that evening seemed light year away culturally from the conversation taking place amongst a half a dozen or so black guys from south London sitting in close proximity on the bus, who were obviously well versed in the current trends in rap music. I realized I understood little of what they were saying. Blue skies interrupted by spells of light to driving snow persisted throughout the day as I explored the streets of central Manchester.

The Greater Manchester Metrolink tram/light rail system snakes its way through the city centre and serves a dual purpose in allowing any visitor to maintain their bearings whilst wandering the streets. The number of homeless on the streets, sleeping in doorways or asking for spare change remains a disconcerting experience which, sadly, plagues most modern cities in the UK and Europe. I stumbled into a pro-Palestinian demonstration on Ann’s Square

which threatened to get out of hand when the activists and and a passerby began trading insults.

I was pleasantly surprised to discover some truly exquisite architecture. The Royal Exchange was one of the world’s centres for cotton trade until the Second World War, when the building took a direct hit during the Manchester blitz. Reduced in size but not stature, the Hall was repaired and saw continued trade until 1968. In the 18th century the trade was part of part the slave trade in which African slaves were transported to America where the cotton was grown and then exported to Liverpool where the raw cotton was sold. The raw cotton was then processed in Manchester and the surrounding the cotton towns and Manchester Royal Exchange traded in spun yarn and finished goods throughout the world. Threatened with demolition, the building remained empty until 1973 when it converted to house a theatre company. It was damaged on 15 June 1996 when an IRA bomb exploded in Corporation Street less than 50 yards away. After repairs taking over two years at a cost of £32 million, the refurbished theatre re-opened on 30 November 1998. The theatre was repaired and provided with a second performance space, the Studio, a bookshop, craft shop, restaurant, bars and rooms for corporate hospitality. One can still however see the original trading board with the day’s closing figures. 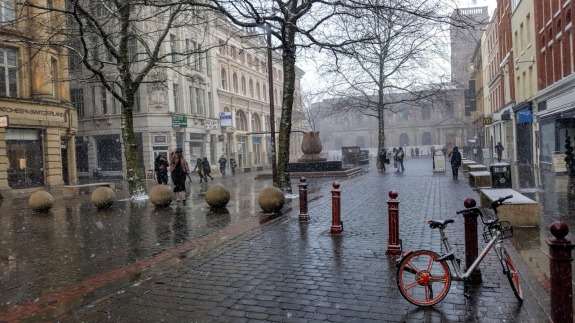 Manchester Cathedral is an absolute gem and I spent an inordinate amount of time photographing the nave from various angles. Although there is evidence of an early Saxon church in Manchester in the form of the Angel Stone, dated to around 700, which was discovered embedded in the wall of the original South Porch of the Cathedral in the 19th century. The present church was built beside the manor house – now part of Chetham’s School of Music on the site of Manchester Castle, around 1215. The church became a cathedral in 1847, when the Diocese of Manchester was created. During the Manchester Blitz in 1940, a German bomb severely damaged the cathedral. It took almost 20 years to complete the repairs. All the Victorian stained glass was destroyed but replaced over several decades.

The AirBnb I had booked was situated at least 30-40 minutes’ walk south of the city, off Princess Street. The owners being away, I located it before the evening concert, in order to freshen up. The Bridgewater Hall, venue for the concert, cost around £42 million to build and currently hosts over 250 performances a year. 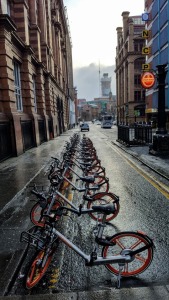 The hall is home to The Hallé orchestra, and is the primary concert venue for the BBC Philharmonic Orchestra. I’m not fully convinced the sound was of the best from my vantage point – Geoff Downes’ keyboards seemed low in the mix. YES played for over two hours and was well received by the enthusiastic audience of die-hards. I particularly enjoyed the second half of the show, which featured two sides of 1974’s controversial Tales From Topographic Oceans. A visit to the merchandise stand at the interval dented my wallet a tad – the 50th anniversary program resembles a book, more than anything. Like most cities in the north of England, the streets come alive at night as the multitude of clubs in the city are besieged by teenage revelers. I’m always astounded as to how scantily clad girls are willing to pay the price in order to withstand the extreme cold, in order to look the part.

It was the final fixture of the Six Nations 2018 rugby season and Ireland, who had already secured the tournament, were playing hosts to England. This being St Patrick’s Day, the city was also crawling with Irish wearing all sorts of green attire commemorating a holiday steeped in tradition, whilst celebrating the fact that they had got one over the English. A huge tent had been erected outside the town hall, where the match was being broadcast.